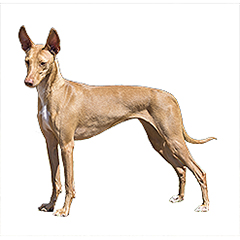 The Cirneco dell’Etna (pronounced “cheer-nay-ko,” plural Cirnechi, pronounced “cheery-nay-kee”) is an ancient breed, having been in Sicily over 3,000 years ago. They share common ancestors with the Pharaoh Hound, and their evolution has been driven by their environment more than by human intervention – they developed in the area surrounding Mount Etna, an active volcano. They were mostly owned by peasants, who relied on their hunting ability to help feed their families. Baroness Agata Paterno Castello took an interest in the breed in the early 20th century and began to document and breed them. While the first breed standard was done in 1939, they did not come to the US until the 1990s. They received full AKC recognition in 2015.

Cirnechi are friendly, affectionate, and loyal – but they’re also independent and incredibly intelligent. Although they’re only moderate energy dogs, they need plenty of mental stimulation in order to be happy – they can be noisy and destructive when they’re bored. They will chase small animals, so a high fence is a must, and early socialization is crucial if you plan to keep one in a home with cats or small dogs.

These sleek, medium-sized dogs tend to come in shades of chestnut and tan, and have a short coat. Their ears are high, rigid triangles set close together, and when combined with their bright eyes, give Cirnechi an alert expression to match their personalities.

A harsh environment means these dogs have evolved to be smart, keen learners. They respond best to gentle training methods but watch out – their intelligence can make them a little mischievous! They are curious and want to do things together, so spend time teaching them obedience; some sports such as lure coursing or agility will give them a positive outlet for all of those hound instincts they’ve developed over the centuries.

The Cirneco has a short, easy-care coat – brush weekly to remove dead hairs, and give him a quick bath if he gets into anything stinky. Don’t forget to clean his ears and keep nails trimmed – but take the time to develop a positive association with these activities because they’re not crazy about having their feet touched. Of course, his thin coat and lean body do not make him a good cold weather dog, so a coat in the winter, and plenty of soft blankets inside will be very much appreciated.

Cirnechi are known as hardy dogs with very few inherited conditions to worry about – but being so rare, it is hard to say for certain whether there are any significant concerns. So as with any dog, regular wellness checkups, exercise, and a healthy diet will go a long way to keeping them healthy and happy.

So rare that they don’t appear in pop culture much, you can catch plenty of Cirneco antics on YouTube!

© Copyright 2015 LifeLearn Inc. Used and/or modified with permission under license.