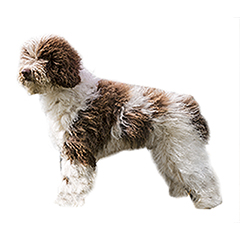 While considered an ancient breed, the history of the Spanish Water Dog is not well known. They probably share common ancestors with Portuguese Water Dogs, but theories disagree on whether they came from Turkey or from Northern Africa. They have been used as farm dogs, herding sheep and goats, and some were even fishermen’s dogs. In the recent past, the breed was revived in the late 1970s, with the Spanish Water Dog Club (Spain) forming in 1980. They were added to the AKC’s Foundation Stock Service in 2005, and finally received full breed recognition as of January 1, 2015.

Spanish Water Dogs are very active and have strong herding and guarding instincts – they are intelligent, loyal, and affectionate, making them excellent guardians. They need to be well socialized as puppies in order to live well with children; they tend to be wary of strangers, at least until you show they’re okay. Spanish Water Dogs are an organized breed – they like routine and don’t like things out of place. They tend to be “Velcro dogs” – while they accept the whole family, they tend to attach to one person in particular.

The most distinctive feature of Spanish Water Dogs are their curly coats that sometimes cord when they get long. They come in many colors, including solid black, beige, brown, or white – some have two colors, but the second is always white. They are medium-sized, with wide-set eyes in hazel or brown; they have triangular ears, and their tails are often docked.

Spanish Water Dogs are intelligent and loyal, and they love to work – this combination makes them easy to train using positive methods. In fact, they would be happy to learn all sorts of tasks, like obedience, herding, search and rescue, water sports, agility, and even therapy work.

The curly, non-shedding coat of the Spanish Water Dog is actually pretty low maintenance. You’ll have to shave them down once or twice a year, and when it begins to cord, you may have to help a little to keep the cords neat and prevent matting. When bathing him, use a gentle dog shampoo and pat or squeeze the cords with a towel – never rub. Beyond that, check his ears frequently to see if they need cleaning, and keep his nails trimmed, and you’re good to go!

Every breed has a few genetic predispositions towards health issues. Spanish Water Dogs are known to be prone to hip dysplasia and eye disorders (particularly progressive retinal atrophy), as well as hypothyroidism, Addison’s disease, and exocrine pancreatic insufficiency. Choose your breeder carefully and don’t be afraid to ask questions about the health of breeding dogs and their puppies.

While they are not common in pop culture, there are all kinds of SWD antics on YouTube!

© Copyright 2015 LifeLearn Inc. Used and/or modified with permission under license.