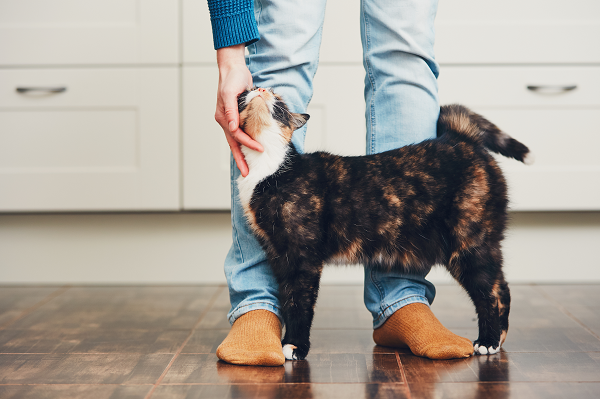 When does a female cat have her first estrus cycle?

Cats have their first estrous (reproductive) cycle when they reach puberty. On average, puberty, or sexual maturity, first occurs in cats at about six months of age, but this can vary slightly by the time of year (length of daylight hours).

The estrous cycle is better known as a cat's heat cycle. Each cycle consists of several stages; the stage called estrus refers to when the female is sexually receptive, or in heat.

How often does a female cat come into heat?

Cats are seasonally polyestrous, which means that they have multiple cycles during the breeding season. The breeding season will vary according to geography and environmental factors such as temperature and the number of daylight hours. In the Northern Hemisphere, cats usually cycle from January until the late fall. Cats that live in more tropical regions or mainly indoors, however, may cycle all year round because of the increased number of daylight hours.

How long does estrus last?

What are the signs of estrus?

The most notable signs of estrus in cats are behavioral. Most cats become very affectionate, even demanding; they persistently rub against their owners (or objects such as furniture), constantly wanting attention. They roll on the floor more often. When stroked along the back or spine, they raise their rear quarters into the air and tread with the back legs. They also become very vocal. These behavior changes often become annoying to owners, and sometimes owners think their cat has some unusual illness.

"The most notable signs of estrus in cats are behavioral."

Some female cats will urinate more frequently or may even spray urine on vertical objects (marking) when they are in heat. The urine contains both pheromones and hormones, both of which act as signals of her reproductive status to other cats. This is the reason that queens in heat attract Tomcats (intact male cats). In some cases, this may be the first indication that a young cat has reached puberty. Tomcats that have never been seen before in your yard or neighborhood will appear. They may spray urine on the house to mark the territory (and female) as theirs or may even attempt to enter the house to mate with the female.

At what stage of the estrous cycle is the cat able to get pregnant?

The queen can be bred at any time while in heat. Cats are induced ovulators, which means that the act of breeding stimulates the release of eggs from the ovaries. Most females require three to four matings within a 24-hour period for ovulation to occur. It only takes a minute or two for cats to mate, and cats may mate multiple times in a short period of time. Queens may mate with several different tomcats during this time, so it is possible that a litter of kittens may have several different fathers. Once ovulation has occurred, the queen will go out of heat within a day or two.

"...it is possible that a litter of kittens may have several different fathers."

How long does pregnancy last in a cat?

Pregnancy in the cat lasts approximately 64 to 71 days with an average of 65 days (nine weeks).

How can I prevent my cat from becoming pregnant?

The best way to prevent your cat from becoming pregnant is to have her surgically sterilized (ovariohysterectomy or spay operation) before she has her first estrous cycle. Since it can be difficult to predict when this first cycle will occur, most veterinarians recommend performing an ovariohysterectomy when the cat reaches six months of age.

Should I let my cat have an estrus cycle or a litter of kittens before spaying her?

A common myth is that female cats will become more friendly and sociable if they are allowed to have a litter of kittens. This is not true and only serves to contribute further to the serious problem of the overpopulation of cats.

© Copyright 2022 LifeLearn Inc. Used and/or modified with permission under license.