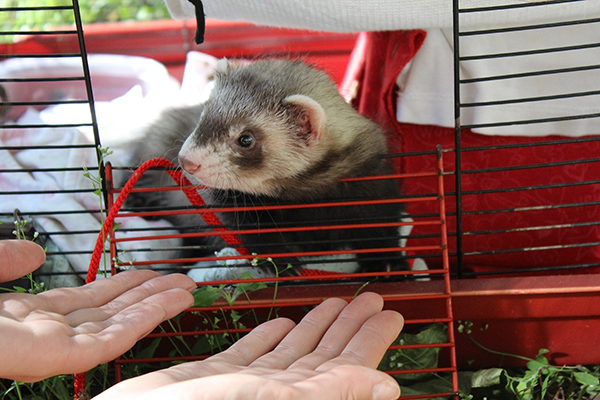 Canine distemper virus is a paramyxovirus that can infect both dogs and ferrets. In the dog, canine distemper causes severe and sometimes fatal illness. In the ferret, canine distemper is typically a fatal illness. The virus is normally spread through droplets in the air (i.e., by an infected ferret or dog coughing or sneezing out infective virus particles that are then inhaled by a susceptible/unvaccinated ferret). The distemper virus can survive for up to three hours in the environment, so it can also be spread by hands, gloves, food/water bowls, and litter pans.

"In the ferret, canine distemper is often fatal."

The key symptom of this disease is a purulent (pus-containing) discharge of the eyes and nose. However, the first sign in a ferret is often a rash on the chin or abdomen, followed by development of swollen and crusty skin around the eyes and muzzle. Most ferrets with distemper become lethargic and depressed. They may develop a cough or display sneezing fits. Vomiting and diarrhea with melena (black, tarry stool due to intestinal bleeding) may occur in some ferrets. Neurological signs (brain function problems) may occur is some ferrets, including seizures, incoordination, muscle tremors, and partial or full paralysis. Bacterial infections commonly occur secondary to distemper, probably because of a compromised immune system in affected animals.

Initially, the symptoms of distemper are very similar to influenza (flu). However, ferrets with distemper generally appear much sicker than those with influenza. Certain symptoms, such as hardening of the footpads (which give the disease in dogs the name "hardpad"), indicate that distemper should be very high on the list of possible causes for a ferret’s illness.

Treatment is rarely effective and the mortality rate usually close to 100%. Supportive therapy, such as antibiotic treatment, intravenous (IV) fluids, nutritional support, and placing in an oxygen tent, may relieve discomfort and ease the animal's suffering. Because this disease produces symptoms that are similar to human influenza in ferrets, treatment should always be attempted.

"Vaccination is essential in any animal that may be exposed to the disease."

Vaccination is essential in any animal that may be exposed to the disease. Unvaccinated ferrets and unvaccinated dogs, as well as playgrounds or parks where unvaccinated pets may congregate, are a potential source for exposure.

There are specific ferret distemper vaccines approved for use in ferrets. Multivalent canine vaccines are not recommended. Young ferrets should have three vaccination boosters in the initial immunization series, at 4-6 weeks, 10-12 weeks, and again at 14-16 weeks of age. In subsequent years, the ferret should receive annual boosters. Newer data is showing that some ferrets produce an immunity to the vaccine that may last longer than one year. Many veterinarians are recommending yearly ‘vaccine titer’ testing to see if the vaccine is still producing adequate protection against the distemper virus.

Ferrets can have adverse reactions (anaphylaxis) to both Distemper and Rabies vaccination. It is always worthwhile for owners to wait in the veterinary practice for 20-30 minutes post-vaccination to ensure that vaccine reactions such as acute breathing or vomiting problems do not occur.

Many veterinarians will administer a diphenhydramine (Benadryl) injection prior to the distemper vaccine to decrease the risk of a vaccine reaction. If problems do occur, your veterinarian can immediately administer an antihistamine and a steroid injection. Other vaccine reactions that may occasionally occur include a mild fever or diarrhea, but generally, these are transitory or short-lived conditions. It is wise to hospitalize and monitor a ferret having such a reaction.

Human influenza virus can affect ferrets, and infected ferrets can affect humans in close contact. Rather than the severe purulent nasal and eye discharge seen with distemper, influenza generally causes sneezing and conjunctivitis (inflamed tissues around the eyeballs and eyelids), with a watery discharge from the eyes and nose. Other symptoms may include coughing, trouble breathing, fever, anorexia, and lethargy.

"Young and immunosuppressed ferrets can develop an infection of the bronchi or small air passages within the lungs."

In otherwise healthy adult ferrets, involvement of the lungs is uncommon. However, young and immunosuppressed ferrets can develop an infection of the bronchi or small air passages within the lungs (bronchitis or pneumonia). In such cases, antibiotics are essential to control secondary bacterial infections. These secondary infections can prove fatal to young ferrets; intensive supportive veterinary therapy is essential to prevent fatalities. Your veterinarian may prescribe one of the human influenza medications to help your ferret recover quicker. If there are humans in the house with fever and flu symptoms, they must stay away from the ferret until they have been without symptoms (and fever-free) for 24 hours. 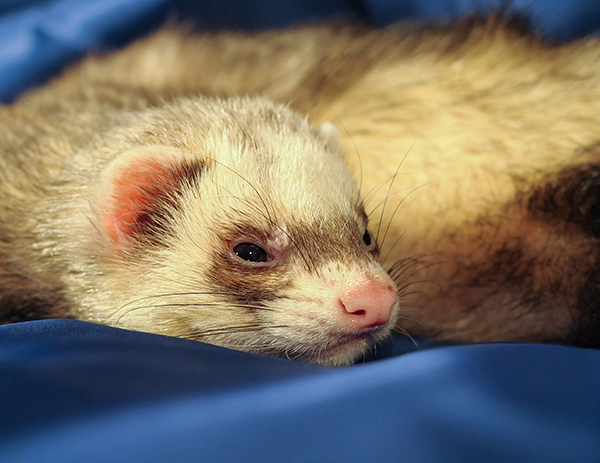 Like in dogs and cats, heartworm disease should always be considered in cases of respiratory distress in a ferret. Heartworms are transmitted by mosquitos. Yes, mosquitoes can even enter your home! Symptoms of heartworm disease include lethargy, weight loss, and moderate to severe difficulty breathing. Chest radiographs (x-rays) will often show a large amount of fluid in the chest cavity. Diagnosis requires finding heartworms in the heart on a cardiac ultrasound or the use of an in-house heartworm blood test. It should be noted that In-house heartworm tests for ferrets are not highly accurate, so ultrasound is the better way to provide an accurate diagnosis.

Lymphoma, a cancer involving the lymph nodes and lymphoid organs, can present as a respiratory problem if the tumor involves the thymus or the lungs. In these cases, the ferret may present wheezing, very weak, and/or cyanotic (purple gums, nose, and sometimes feet). Radiographs of the chest may show a mass in the chest cavity or tumors in the lung tissue. Blood work, ultrasound, or needle aspirates may be necessary to specifically diagnose the disease status and plan a treatment strategy.

In DCM, the heart become dilated and cannot contract. Later stages of this disease may produce fluid build-up in the chest and/or abdomen. The ferret may show signs of mild to moderate respiratory distress.

HCM causes a thickening of the heart muscle. It generally causes lethargy and mild respiratory distress as the heart is not pumping properly and not allowing for adequate oxygenation to the blood supply.

In both cases chest radiographs, cardiac ultrasound, and echocardiogram are required to properly diagnose the condition. An accurate diagnosis is essential to determine the proper treatment regimen for your ferret.

Other Causes of Respiratory Disease in Ferrets

Bacterial and fungal diseases may affect ferrets, although not as commonly as the diseases mentioned above. Blood tests, chest radiographs and special testing (such as tracheal or lung washes) may be necessary to properly diagnose infectious respiratory disease in your ferret. Trauma can cause respiratory problems due to bleeding within the chest cavity or from pneumothorax, in which air enters the space between the lungs and causes collapse of the lungs. Following any significant trauma, it is important to take radiographs to determine whether there are any problems within the chest.

© Copyright 2021 LifeLearn Inc. Used and/or modified with permission under license.